This amazing, British-built motorcycle takes style and performance onto a fresh plateau, writes Iain Robertson, and, while sales will be stymied by its hefty £90,000 price tag, it is a genuine gamechanger to send the entire bike sector into a spin.

Arc Vector is the world’s most advanced electric motorcycle. The neo-café racer will enter full production at the end of next year, with 399 units to be built to order in the first 18 months, at a state-of-the-art facility, at St Athan, in South Wales. The Vector boasts Human Interface Technology, a state-of-the-art carbon monocoque and swing arm, ground-breaking hub-centre steering, power-dense battery cells, bespoke brakes and suspension, and race-inspired wheels. 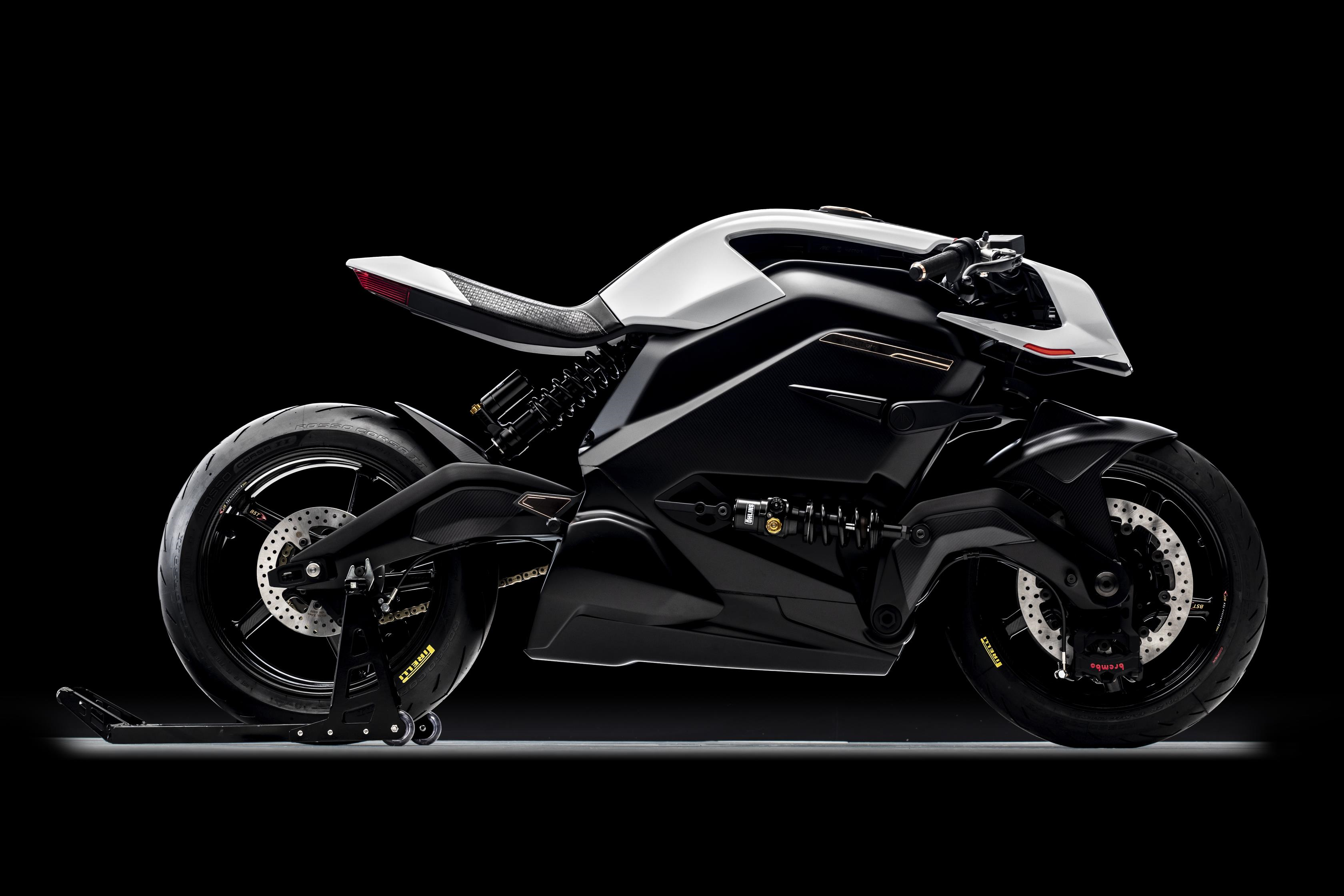 At the centre of the Vector is its ingenious battery-module carbon monocoque. Simplicity is key to its design and, countering the weight of the battery pack, the watchword is lightness. The motor and batteries are structurally integral to the monocoque, making the frame incredibly stiff. The machine’s total dry weight is just 220kg. 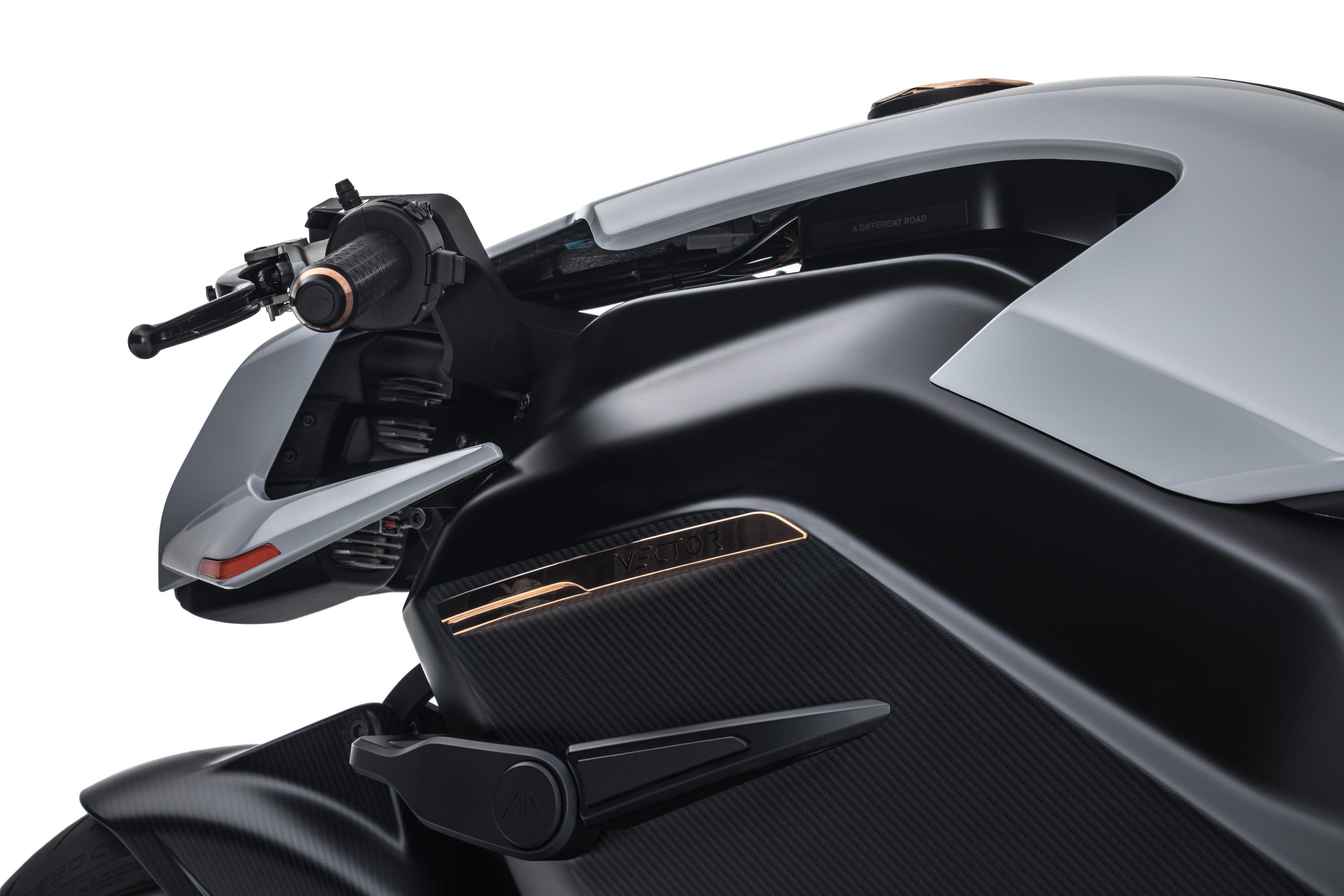 Founder and CEO, Mark Truman, has undertaken the lion’s share of track testing himself at circuits and airfields around the Midlands, fettling the finer points of the Vector’s geometry and handling. “The hub-centre steering (HCS) system we’ve developed gives the bike low-speed control”, explains Mark. “There is a handful of manufacturers that have implemented it in the past, but with an anti-dive system. Riders want the bike to dive under braking, so we’ve created a system that has all the benefits of HCS but that feels like a set of forks. The advantage is stiffness which allows for a steep rake angle and a chassis that enables fast changes of direction with stability at high-speed. What we’ve devised is the best of both worlds with none of the negatives.” 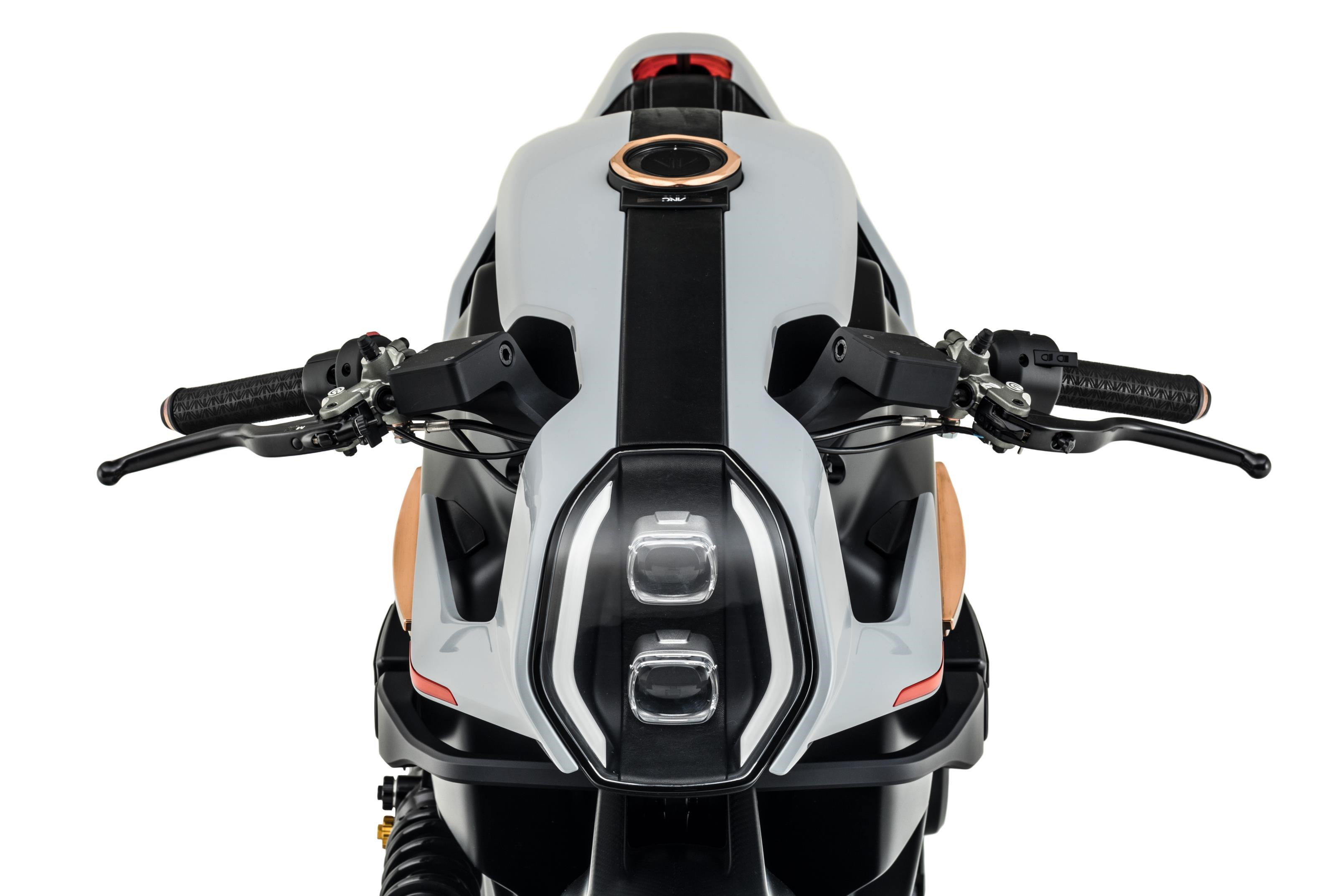 Arc’s technical partners represent a best of breed. The brake discs are Brembo and the Ohlins suspension is entirely customisable. The unique BST wheels are as light and strong as those of any pro-race bike. Anti-lock brakes have been provided by Continental, Pirelli has made the tyres and the battery package is by Delta Motorsport. Arc has developed its own electric motor that saves on packaging space, while being light and very powerful. All the ECUs are automotive grade. The packaging of these components is ingenious, enabling the lowest possible centre of gravity, minimal weight, sufficient cooling and a short, nimble wheelbase. 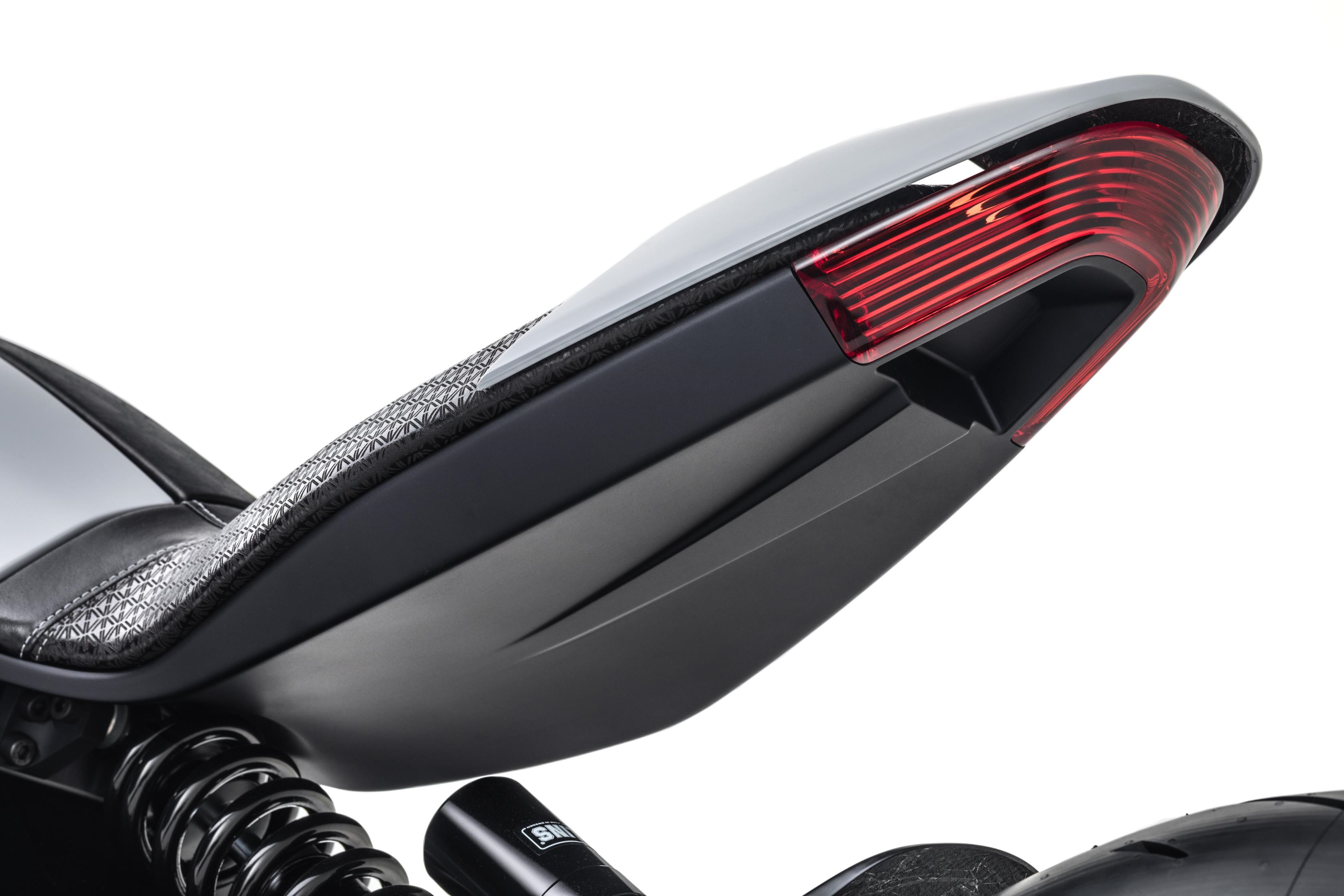 Cutting-edge Samsung 21-700 batteries, of which the Vector packs a vast 960, are some of the most energy dense and reliable cells on the planet and the Arc Vector is the first motorcycle to use them. With a 399V electric motor producing 133bhp, the Arc Vector will have the best power-to-weight ratio of any electric two-wheeler at 650bhp per tonne. Its combined range will be around 270 miles. It will crack 0-60mph in just 3.0s, with a top speed of 125mph. There is no clutch and no gears. Massive torque, traction control, ABS brakes, variable dynamic modes and a Head-Up instrument display and haptic alert systems make the Vector riding experience unique, safe and utterly other-worldly. 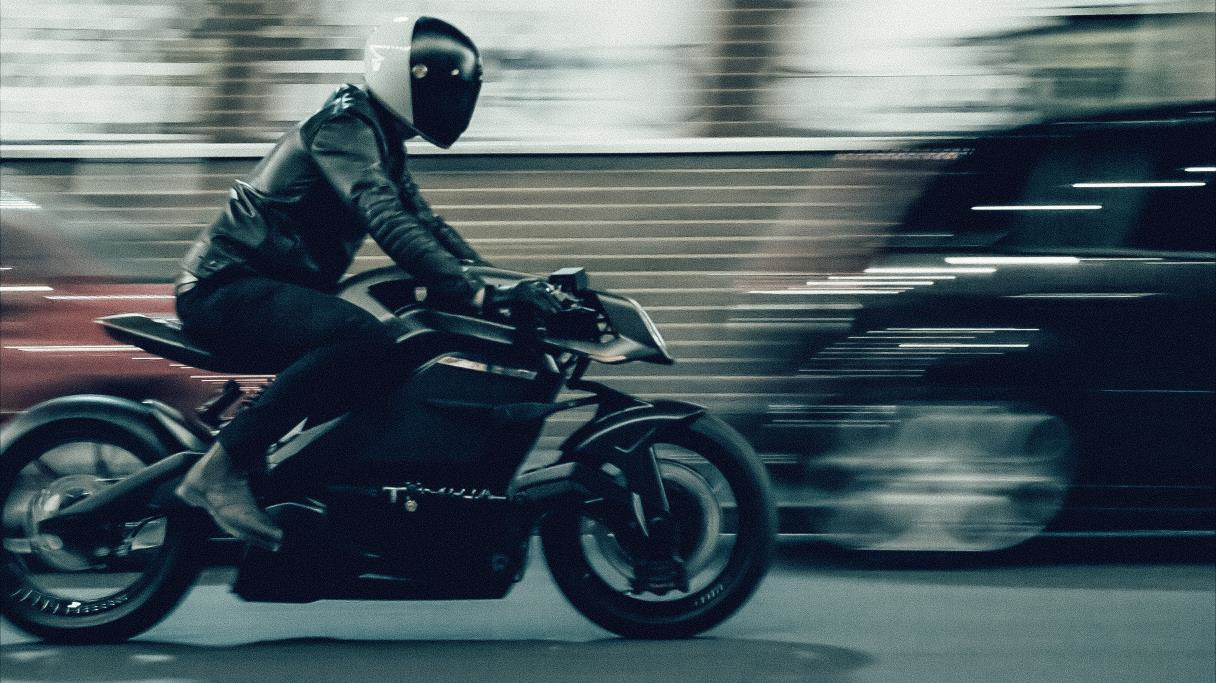 While most automotive news seems to centre on electric cars, ARC Vector deals a fresh approach to motorcycling that cannot be ignored.